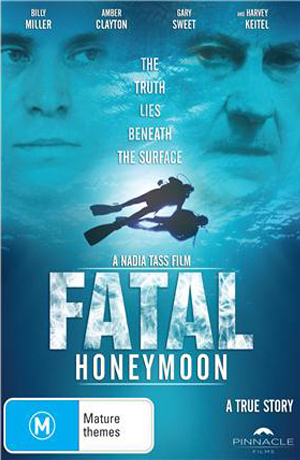 Based on a true story, Fatal Honeymoon tells the shocking story and controversy surrounding a newlywed who tragically dies on her dream honeymoon and the subsequent investigation as to whether or not her husband was guilty of killing her. In the film, Alabama couple Gabe Watson and his new bride, 26 year-old Tina Watson, married just 11 days, go on their dream honeymoon to scuba dive near Australia’s Great Barrier Reef, where Tina drowns in what appears to be a freak accident. With authorities puzzled over Gabe’s inconsistent statements about Tina’s death, her father Tommy Thomas begins to suspect Gabe may have murdered his daughter. When an underwater photo of Tina lying motionless on the ocean floor emerges, Australian authorities begin to suspect foul play, charge Gabe with his wife’s death and extradite him to their country, where he eventually pleads guilty to manslaughter and serves 18 months in prison. Alabama prosecutors, agreeing with Tommy’s suspicion Tina was murdered and Gabe had possibly planned it before they left the state, decide to pursue murder charges in the United States. But, due to lack of evidence, the judge dismisses the case – causing many to wonder what a jury would’ve made of the evidence and leaving Tommy with more unanswered questions about what actually happened to his daughter on her honeymoon.

In 2012 I received a call from Robert Kral, a talented composer here in Los Angeles known for his work on shows like Angel, The Dresden Files, as well as animation projects that include ScoobyDoo Mystery Incorporated,  Superman/Doomsday and Batman Gotham Knight.   I was already a fan of Rob’s score for The Haunting in Connecticut.  They were under an incredibly tight schedule for FATAL HONEYMOON, and could I help?

I’ve always had an unusual interest in Lifetime Movies, and my wife had made me watch a LOT of them.  So I said yes and jumped onboard the project.  It was a lot fun working with Rob, even under intense circumstances, and we turned out a solid score for this true story of obsession, and possible homicide.    Plus… Harvey Keitel!