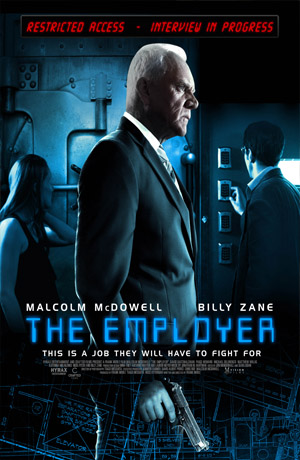 “Five candidates are vying for the same job for a high-powered corporation whose business practices are shrouded in mystery. On the night before the last interview they are contacted by the interviewer informing they will be tested, only to find themselves drugged and trapped in a room fighting for survival, as only one candidate will get the job.”

The Employer was Frank Merle’s directorial debut, as well as the first feature film I scored.  So a first for both of us!  The film features a 75 minute original score that blends an orchestral and electronic textural sound.   There was a personal creative collaboration on this, as Frank didn’t temp the film with any music.  It was a completely blank canvas to write to.

It was a real pleasure working with Frank, who has become a close friend over the years.  We both learned a lot about filmmaking on this picture.  I’ll always be thankful for the opportunity Frank gave me, which started my feature scoring career after assisting composer John Ottman for several years.   Also of note is David Dastmalchian, who has also gone on to many interesting projects, including roles in ANTMAN, PRISONERS,  and the semi-autobiographical acclaimed film, ANIMALS.