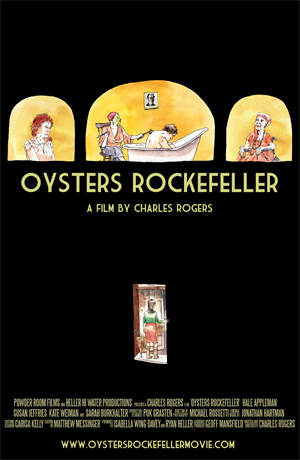 “Gibbon Pearl, raised by his overprotective mother and aunt, has never been allowed outside. On the anniversary of his grandfather’s death, he meets Lucy, and falls instantly in love.”

OYSTERS ROCKEFELLER was the first of two films I’ve scored for Charles Rogers.  Charles is an immensely talented and funny person- his sense of humor is beautifully distorted and dark, but also gentle, warm, and with real sincerity behind it.

OYSTERS is also beautifully shot and costumed, and features an impressive performance by Hale Appleman (The Magicians) as naive man-child who wants to explore the world beyond his Brooklyn brownstone and his demanding mother.    Charles is an incredibly collaborative guy, and together we found a wonderful tone that inspired some magic, wonder, as well as some period specific jazz!

Charles is making great strides as a writer and director, having recently worked on the new Netflix Wet Hot American Summer, Mozart in the Jungle, and his South by Southwest award winning feature FORT TILDEN.