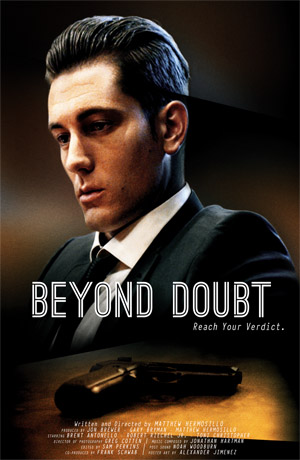 BEYOND DOUBT is Matthew Hermosillo’s directorial debut, a gritty legal drama that looks at a hard case.  A police officer has shot and killed a fellow officer, but was it reasonable?  As viewers, we take the perspective of jury of the case, and get to see the events that led up to the officer’s death from the witnesses and participants of the violent encounter.    Beautifully shot, Matthew’s first film is a bold, unique take on the legal thriller genre.

For the original score, I utilized some cutting edge electronic textures and married them to the emotional feel of a string quartet.  For the quartet we recorded some incredible musicians from the L.A. Philharmonic Orchestra.   Additional thanks and credit to Eric Fischer for his wonderful music mix, as well as Stefan Swanson for music preparation and score coordination on the project.

BEYOND DOUBT will be on the film festival circuit as of early 2016.